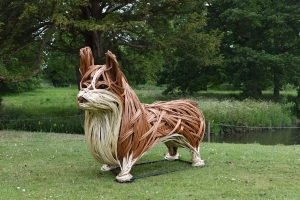 Broadland District Council will soon auction its wicker and wire corgi sculptures, created in celebration of Queen Elizabeth's Jubilee in the summer of 2022.

Four of the beautiful corgis, created by local community arts organisation Tin House, are looking for their forever homes after being admired and enjoyed by residents and visitors around Broadland last year.

All proceeds will be donated to Nelson’s Journey, which is a charity offering support to children going through bereavement and is the charity chosen by Broadland District Council Chairman John Fisher to support during his tenure.

The Council offered one of the corgi's called Susan – named after the Queen’s first corgi companion – to the Royal Household in recognition of our late Queen. It has been gratefully accepted by the King and will be available to view on Sandringham Estate this June.

A letter to the Council from Buckingham Palace said that “His Majesty was delighted to accept this gift and was most touched by this thoughtful gesture”.

The remaining four 6ft long and 4ft high corgi sculptures are going to auction on 2 February at 10am through Horners Auction House.

“Anyone who enjoyed seeing these handcrafted sculptures at tourist and beauty spots last summer now has the opportunity to own one, whether they want to display it at their business or home. I appreciated the corgi at River Green, Thorpe St Andrew, on an almost daily basis last summer when I took my Jack Russell for walks, which incidentally is a breed favoured by our new King. I look forward to seeing where these historical pieces of art find a new home and I am thrilled that the auction will support the vital work of Nelson’s Journey.”

Anyone interested in owning one of these limited-edition corgis should go to Horners Auction Hoouse for information. Viewing is available on 1 February from 10am to 4pm and the auction will begin at 10am the following day.