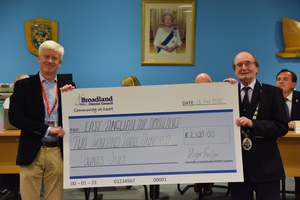 At the Council’s AGM on 26th May, Councillor Roger Foulger stood down from the role of Broadland District Council Chairman.

Councillor Foulger said it had been a great pleasure and honour to serve as Chairman, and he was thrilled to have had the opportunity to raise money for his chosen charity, East Anglian Air Ambulance.

Councillor Foulger raised £2,300 throughout his civic year and presented a cheque to Matthew Jones, CEO of East Anglian Air Ambulance, at yesterday's meeting.  Cllr John Fisher was elected as the new Chairman and his chosen charity is Nelson's Journey. The new Vice Chairman is Cllr Sue Prutton.