Garden waste collections in Broadland resumed week commencing 10 January. These collections follow your normal collection day and have not been affected by the Christmas changes. 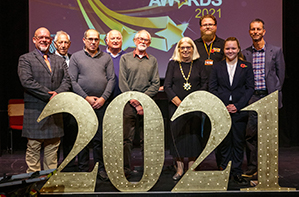 South Norfolk Council celebrated the stars in their communities on Tuesday night at a special awards event held at Diss Corn Hall.

Chairman, Councillor Florence Ellis hosted the awards ceremony, sponsored by Clarion Futures, as the winners of the nine different categories were announced.

“There are so many fantastic people in our district, who don’t realise just how wonderful they are and the difference they are making. These awards are our chance to give them the recognition they deserve and say thank you.”

“We are very proud to have sponsored these fantastic awards and we are grateful for the opportunity to show our appreciation for all those shortlisted. Volunteering is at the heart of healthy and resilient communities and these awards are so valuable in allowing us to pass on our thanks and to be able to showcase some amazing local stories.”

The winners in each category received £250 to give to their chosen community group, charity or voluntary organisation.

The winners of this year’s awards are:

John O’Leary won Inspiration of the year, sponsored by Smurfit Kappa, for his 15 years of work as a Parish Councillor and his efforts supporting vulnerable residents in Thurlton during lockdown.

The Young Hero Award, sponsored by HSBC was presented to Scarlet Mills, who volunteers her spare time for the Scole Nature Trails Trust.

The Helping Hand Award, sponsored by Castlemeadow Care, was won by Carol Essex for her dedicated support for elderly vulnerable people needing transport during lockdown.

Business Community Support of the Year, sponsored by Price Bailey, was awarded to Jim’s Mobile Grocery Store. The shop, located inside a converted van is loaded with fresh produce every day and driven door to door for vulnerable resident to use safely and independently.

Andrew Cox was presented with the Green at Heart Award for organising the community allotment scheme and wild meadowing around the village of Newton Flotman.

Community Group of the Year, sponsored by East of England Coop was given to Norfolk and Suffolk 4x4 response. This charitable organisation went above and beyond to support local residents during last year’s floods.

Volunteer of the Year, sponsored by Clarion Futures, is Victor Wright, a volunteer at Roots Community Cafe in Wymondham, which was set up to help combat loneliness.

This year’s Special Recognition Award was presented to Steve Maddams. Steve was nominated after he saved a young boy’s life. The child was choking on a sweet in a petrol station. Steve who volunteers for Norfolk Accident Rescue Service immediately knew what to do, a true hero.

You can find out more about the winners on our Community Awards page.