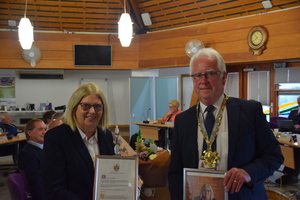 At South Norfolk Council’s AGM, held on Monday 23 May, Councillor James Easter was elected as Chairman.

New Chairman James Easter said that it was an honour to be elected to the role. He thanked Councillor Florence Ellis for her hard work in promoting the Council as Chairman over the previous year.

Councillor Easter has chosen the theme of supporting local communities, and also named the charity that he would be supporting during his time in office as MIND.