Woodlands Give up Their Secrets

You may have recently noticed some weird structures hanging up in some of the trees at Broadland Country Park? These have been put up by the entomological team from the Norfolk and Norwich Naturalists Society.

Certain beetles and other insects are very useful indicators of the conservation status and value of woodlands, but it’s not always easy to know if they are around or not. We use “vane traps” to sample a few of them – so-called because they have vanes in them that obstruct flying insects and direct them into the bottle at the bottom, for later study. The ten traps will have been up for a month but only small numbers of insects are caught – just enough for us to learn about them. 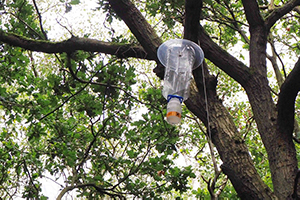 The vane trap in this picture is high up in an oak tree. We had fun getting the line over the branch using a catapult with the end of the string attached to a weight!

Sampling insects is also a really good way to get early warning if pest species are coming our way. With climate change, new species are arriving in Britain all the time and a few of them can be pests of our native trees. Some of you probably remember that dutch elm disease wiped out most of our elm trees a couple of decades ago. The disease is caused by a fungus, but it was brought to Britain by a bark beetle that was originally from Asia.  Bark beetles are just the sort of insect that we can learn about from our vane traps.

The vane traps are not the only thing going on at the park; as we approach autumn, lots of fungi species are emerging. The Norfolk and Norwich Naturalists Society have discovered a Hoof Fungus Fomes fomentarius adorned with cocoon-like objects. These turned out to be the cocoons of a fungus gnat Sciophila rufa.

So, what’s all the fuss about?

The Hoof Fungus, a parasite of birch trees, is common in the Scottish highlands and the north of England but did not make an appearance in Norfolk until 2008. Since then, it has become widespread, especially in the north and west of the county. 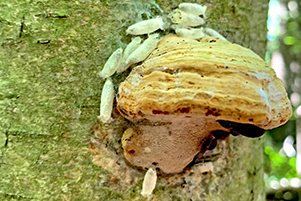 The fungus gnat that has been making good use of the fungus at Broadland Country Park is much rarer and this is only the second record for Norfolk. The first was at Thompson Common in 2019. The larvae feed on the spores of the fungus and then make cocoons, as pictured here, in which they pupate and grow into adults. The bright orange adults are on the wing May to September.

There is no response to “Woodlands Give up Their Secrets”